At the end of World War 2, the last man standing, USA, who suffered only minor scratches, established the foundation and led the march towards a globalized world economy. They like to tell you that it was due to “American benevolence” that all countries prospered.

While there were exceptions such as certain occupied vassal states like South Korea and Imperial Japan, both of whom grew under American protection and American technology transfers in exchange for military bases to pursue world domination

Other countries endured the latest incarnation of Western Imperialism.

For a while, it worked great. Non-white countries were plundered and made destitute while the West looked like a “good guy” while actually loan sharking them.

The first symbolic event that showed “free trade” and “Western competitiveness” wasn’t all that it was cracked up to be was Japan’s sudden “decade[s] of stagnation”. During the 1980s, Japan was predicted to take over USA as the world’s preeminent economic power. Anti-Japanese sentiment spread rapidly just like the anti-Chinese attitudes of the past 5 years [See Vincent Chin’s murder by two White men who mistaken him for a Japanese]. The rise of a non-white power? No! That was unacceptable to the White elites who “believe in free competition” and “all men are created equal”.

In 1985, America setup the Plaza Accord with Japan and other “allies” to orderly devalue the USD currency to make American exports more affordable on the world market [lower USd currency --> cheaper American exports --> more international buyers]. It worked and in effect, the America’s economy was saved by Japan economic harikari. Without Chinese economic suicide to boost the the American economy, what did they do? And, that is how Westerners “compete”. Familiar right?

Whites dominates a sport that only rich people can afford to compete in [with a long history performance enhancing drug use] = Master race genetics
Chinese man wins a sport that anyone can compete in = cheaters, cruel training, robotic, soul-less + change the rules so they win less

Another one to add to that ever growing list at http://forum.asiansoul.org/topic/427/guide-comebacks-aka-racist-whites-are-full-of-shit-so-tell-them-to-stfu

A white supremacist went on a hate-filled, racist text message tirade after he was rejected from a date by a German woman who already had an Asian-Canadian boyfriend.

Canada-based Reddit user UmaiUmamiUnagi shared the obnoxious exchange with the racist guy via the subreddit creepyPMs, which was later reuploaded by user effortlessnetinho on the subreddit hapas (hapa being the term for a person of mixed ethnic heritage).

The text messages, which seemed to begin innocently enough with a “movie night” invitation with “friends,” soon escalated quickly into a barrage of creepily obsessive pronouncements in just a few exchanges.

“I’ve liked you since we met first year,” admitted the guy, followed by, “(Why) can’t you just give me a shot to show you how good I can love you?”

The woman replied that she wanted to speak to him at a public place in order to “have an adult conversation” about it. Not being able to take the hint, the guy pushes his intentions, finally asking who the girl was seeing at the time.

When the woman mentioned her boyfriend’s name, he flipped out even more. Having had enough, the girl tried to end the conversation by asking him to leave them alone and not to speak with her again.

That was when he went all out ballistic:

The artist Tyrus Wong died just over a week ago, at the remarkable age of 106. Remarkable as well was the contribution he made to one of the most beloved films of all time. Tracy Smith learned all about his life story firsthand:

For decades, artist Tyrus Wong and his fantastic kites were a fixture on and above Santa Monica Beach.

And while you might not recognize his name, a certain deer named Bambi has Wong to thank for his exquisite settings in the Walt Disney 1942 film.

“He basically created the look of the film,” said Michael Labrie, director of collections at the Walt Disney Family Museum in San Francisco. He curated an exhibition of Wong’s work in 2013. “Everything you see on the screen – the other artists were trained to draw like Tyrus for that film.”

Wong was working a tedious, entry-level job at Disney in 1938, when he heard about the studio’s plans to adapt Felix Salten’s book into a movie.

Walt Disney himself decided that the look of the film would be based on Wong’s drawings. 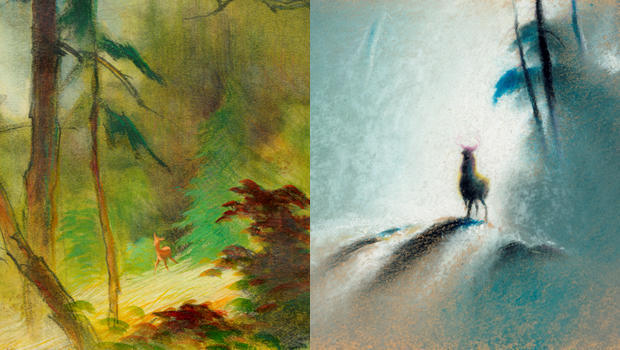 She was watching “Bambi” with her daughter back in 1997, when she happened to catch Tyrus Wong’s name in the credits. “My first thought was, ‘Wait a minute, a Chinese-American working at Disney in the 1930s?’” Tom said. “I just had to find out who he was.”

Continue reading...
Jan 4, 2017
The Asian American ‘advantage’ that is actually an illusion
Jan
4

The Asian American ‘advantage’ that is actually an illusion

For decades, the data on median household incomes have shown the same, persistent racial disparities: Asians beating out whites at the top, while Hispanics and blacks hover near the bottom.

Asian Americans seem to offer proof that minorities can prosper — and even leapfrog whites — if they work hard and jump through the right hoops. For that reason, Asian Americans have often been invoked as a way to excuse the income gaps between whites and blacks or whites and Hispanics.

But why do typical Asian American households outearn typical white households? Like many statistics showing an Asian American advantage, this fact proves illusory upon closer examination. A common explanation is that Asian Americans are better educated. While that’s true, there’s another factor that can completely account for the income gap between Asians and whites.

It has to do with where people reside. People often think I am exaggerating when I say whites are a racist and duplicitous bunch of degenerates. Well, wonder no more…

The people we regard as the laziest, rudest, most promiscuous, drunken drug takers are white men in their twenties.

Three of the top six are Chinese, Jewish and black Caribbean

The lousy reputation of young white men is one of the most striking things to emerge from our surveys. When we look at individual characteristics, white men in their 20s have the worst reputation, out of all 48 groups, for drunkenness, sleeping around, hard work and politeness. They also have the joint worst score, with young black Caribbean men, for a belief that they are prone to drug taking. For those who haven’t gotten up to speed, Hollywood is NOT real.